Hi all, sorry it's been so long since my last post but I have been up to my ears in it again. I promised myself that I would publish my latest book before the end of May so that took the bulk of my time during the last week.

On the pyrography front it has been busy too. Somebody must have started a rumour that there is going to be a shortage of pyrography enhanced trinket boxes in the near future because I've had a run of sales.

This means that I have had to replace my stocks and that comes with mixed blessings. It is good that somebody liked my pyrography enough to part with their hard earned cash, but doing repeat projects isn't as exciting as doing new ones.

On the plus side I like to think that each new trinket pot, even if the design is the same as one that I've done before, will be just that little bit better.

At the end of the day it comes down to money and although I'd like to do something new every time I need to make my pyrography pay its way.

So I thought I'd share the three trinkets pots I have been working on with you, one post at a time. Those who have seen the same pots before will need to bear with me, but even for those readers there will be new information.

We'll start with the Daisy Pot. 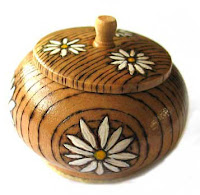 This seems to be a very popular design because I have sold several on www.folksy.com . It has three daisy on the top and four around the sides. I have also used my pyrography iron to burn in the grain in of the wood. The darkness of the burn lines helps the white petals of the daisy to become more pronounced.

The method I follow is to draw the daisy first and then burn them in. Then I do the grain work. Once that is done, I paint the petals and the centre of the daisies white. When the paint is dry, I give the petals another coat of white and do the centre of the flower with cadmium yellow. You may wonder why I make the first coat of the daisy centre white. The answer is that I do it to make the yellow coat become more vibrant.

Once the paint is dry, I give it three successive coats of quick drying  gloss varnish and then kindly ask my wife to give the base inside and out a layer of felt.

Having said that, these trinket boxes sell well you may be wondering why I'm not worried that somebody will steel my design and start making their own. Well I'm not, and that's because I know how long it takes to produce one. People who want to take advantage of another persons hard work are generally only interested in making easy money so my trinket pots will be of little use to them.

By the way if you want to have a go at doing one for you own pleasure please feel free to use my design and I'd love to see a photo of your efforts.

The trinket pot in my next post will be one for the romantics.
Posted by George at 08:30 No comments:

Hi all,
Despite being a busy week I managed to finish the poppy project that I was doing with my pyrography iron.

I would have liked to say that I was pleased with the result, but it was not as easy as I thought it would be after doing the initial sketch and transferring it to the wood. If there was a lesson to be leaned here it was that the initial drawing wasn't good enough and I should have sussed that out before I began burning. I followed the drawing exactly, but the flowers just didn't look right. The specific areas I'm talking about are the bits below the seed heads on both flowers. They don't look too bad in the sketch, but once I had burnt them in they didn't look right at all. 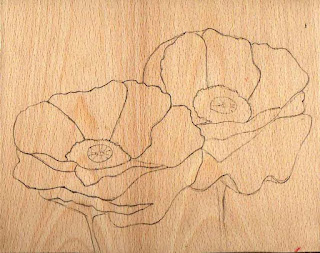 We all know that mistakes made in pyrography can't be undone, So what did I do?
Well if we take flower one, I managed to alter some of the shading and it sorted the issue out. However, the flower at the back was a bigger problem because there were some burn lines that even the darkest shading wouldn't hide.
I had no option but to try and remove the burn lines, which was going to be difficult because the image had been burn into a piece of veneer which was only 0.6mm thick. I have a set of Exacto craft knife blades and I used a couple of those to carefully scrape away the burn lines in the veneer. I took my time to ensure I didn't dig too deep and go through the veneer, and then sanded the area with a piece of 600 grit sandpaper.
It took several attempts at the scraping and then sanding to eradicate the marks, but eventually I won. I then did a bit of re shading to change the shape of the petals and all was well in the world of poppy petals.
The only issue I had now was the stalk on the flower at the front which didn't seem to be in the right place and it jarred my eye. Getting rid of this was going to be more difficult because it was burnt into an area that wasn't going to be shaded so I couldn't hide it easily.
In the end, I decided to move the stem and disguise the line going through it by making the stem look hairy. This left me with another line which needed to go, so I incorporated it into one of the grass blades that I decided to add to complete the cover up. As it happens, I think that the blades of grass improve the overall composition quite well.
When I was completely happy with the image, I gave it three coats of varnish and framed it. I then took a photo of it and stuck it up for sale on Folksy. Here is the finished article. 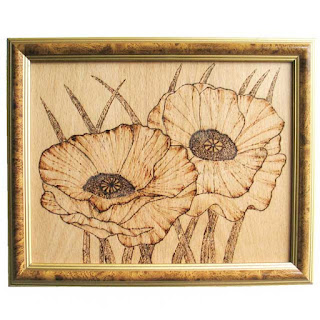 The moral of the story is this. Even if you do make a mistake with your pyrography iron, you always have at least two choices.
Option one.
Use a craft knife blade to scrape away the offending pyrography mark.
Option two
Modify your design to incorporate and or hide your mistake.

I have no idea what I will be working on next, so we can all have a surprise.

Hi All,
Sorry it's been a long time since my last post. They say that time goes quicker as one gets older and they are right. If it carries on like this I'll be getting up before I've gone to bed.

If you were expecting to see the poppies pyrography project finished, I'm afraid it's not to be. I did however, manage to complete one poppy so I thought I would show you that. 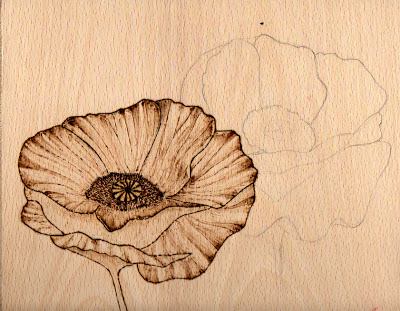 I am still working on the poppy with my pyrography iron, but I thought I would point out one or two things you might want to take into account if you would like to try doing one. Please feel free to copy my drawing.
It is important to take your time when doing this sort of pyrography work because if you make a mistake it can't be undone. So with that in mind I set the temperature of my pyrography iron at a medium temperature. If you are using a Peter Childs machine try it on heat setting number 5. If you are using a fixed tip iron, all I can say is good luck.
﻿

I have used a spoon tip for all the work on this project and I can't imagine how it would be possible to create the effects that are required with any other tip.

I always start by burning in the outline and then once that is done I tackle the shading. This is very important and can make or break the project. I tend to pick one petal to start with and carefully put in some dark marks. If you imagine the surface of a poppy, it isn't flat, it is made up of a series of hills and valleys. So as you shade it in, try to work out in your mind's eye which bits are the valleys and which bits are the hills. Then put the darkest marks in the valleys because that is where the shade will be, and leave the tops of the hills light.

Concentrate on one petal first by putting in some shading lines and make sure each mark goes in the direction of the growth of the petal. The technique with your pyrography iron should be in one sweeping movement. Start on the outside edge and move your iron towards the centre. Because you want most of the darkest marks along the edge of the petals, it is best to take your time as you begin the burn and then slowly speed up. This will ensure that you get a graduated line. If it isn't dark enough, do it again. It is always worth practising this technique on a bit of scrap wood first to give you some confidence.

When you have one petal looking reasonable, move onto the next. Once you have all the petals complete you can adjust the tone of each one to give them some uniformity.

The pyrography marks that surround the circle in the centre of the poppy have been done by turning the heat up a little and doing lots of small stab marks with the point of the spoon tip.

If you have any questions, please let me know and with a bit of luck I will have the whole thing finished for my next post.
Posted by George at 08:02 No comments: 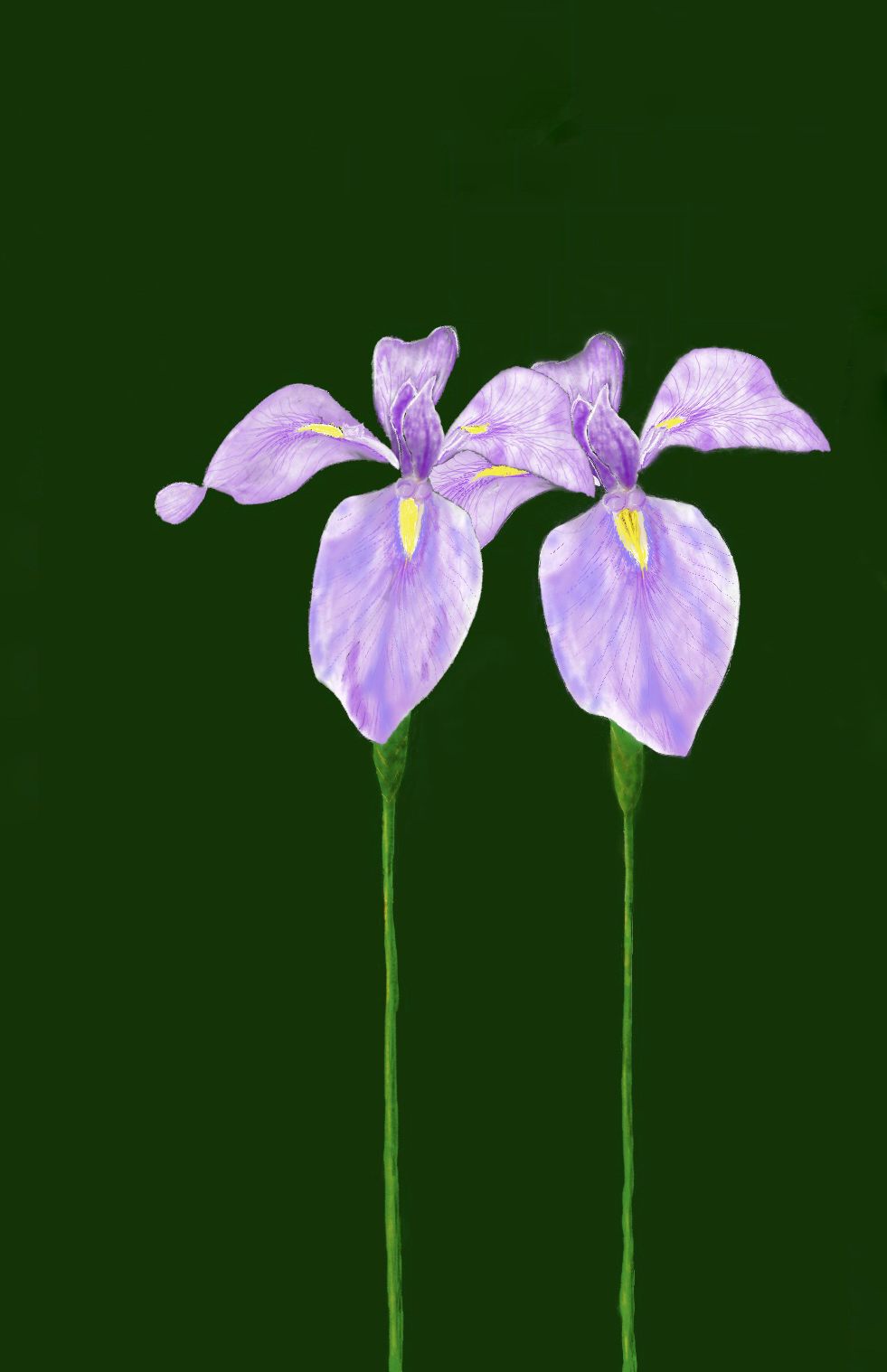